This week I am excited for… 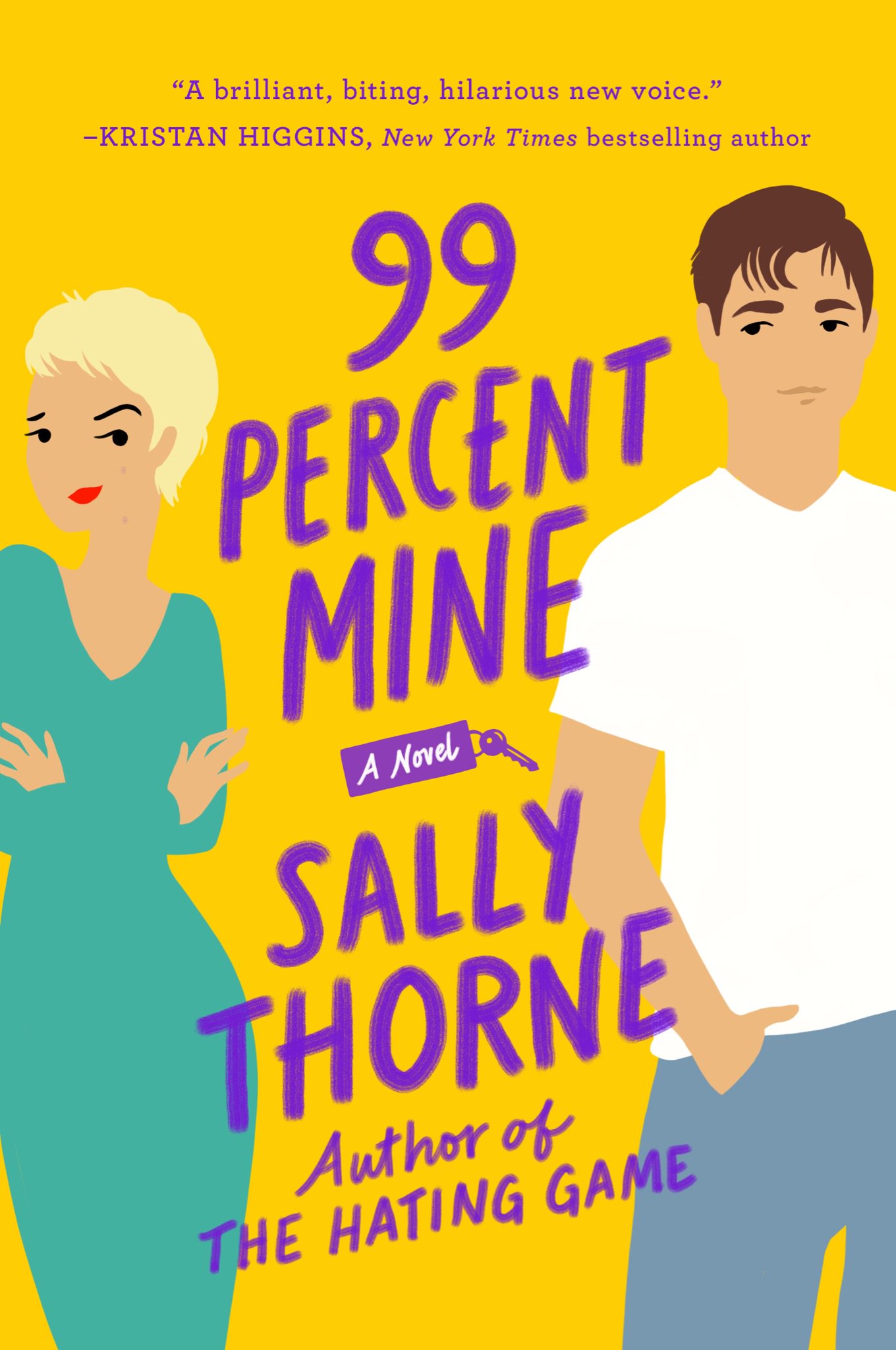 99 Percent Mine by Sally Thorne

Synopsis via Goodreads: Crush: a strong and often short-lived infatuation, particularly for someone beyond your reach…

… If Darcy Barrett hadn’t met her dream man when she was eight years old, the rest of the male population wouldn’t be such a let-down. No one measures up to Tom Valeska, aka the best man on Earth, not in looks, brain or heart. Even worse is the knowledge that her twin brother Jamie saw him first, and claimed him forever as his best friend.

Tom’s off limits and loyal to her brother, 99%. One percent of Tom has had to be enough for Darcy, and her adoration has been sustained by his shy kindness. And if she’s honest, his tight t-shirts.

Now Darcy’s got three months left to get her life together, before her twin insists on selling the tumble-down cottage they inherited from their grandmother. By night, she’s working in a seedy bar, shooting down lame pickups from bikers. By day, she’s sewing underwear for her best friend and wasting her award-winning photography skills on website shots of pens and novelty mugs. She’s enjoying living the messy life, and a glass of wine or ten… until that one night, when she finds a six-foot-six perfect package on her porch.

As a house flipper extraordinaire, Tom has been dispatched by Jamie to give the cottage a drastic facelift that will result in a ton of cash. Darcy doesn’t appreciate Tom’s unsentimental approach to knocking down walls, and he really, really doesn’t approve of her current burnout boyfriend. They can’t be in the same room together without sparks flying- and it’s not the faulty wiring. One bedroom wall separates them at night, and even that’s looking flimsy.

Will Tom ever see Darcy as anything other than a little-sister obstacle to get around? And can she stand up to her most formidable opponent—her twin? This time around, she’s determined to make Tom Valeska 99 percent hers, and he’s never managed to say no to her yet…

GUYS. I am absolutely S H O O K because The Hating Game is one of my fave adult romances of all time so seeing Sally Thorne release another book has me extremely hyped! This one sounds freaking ADORABLE because we loooove a brother’s best friend romance with a dash of the guy disapproving the girl’s current man. I can already FEEL that sexual tension this book is serving us from the synopsis alone so yeah brb while I completely DROWN in the deepest and swooniest of feels.

Feel free to let me know if you’re also hyped for 99 Percent Mine and/or what other book(s) you’re anticipating. Until next time,

heeey i’m taylor! i’m a booktuber, blogger, and a film/music enthusiast. i love plants and puppies and the classic ole’ vines that we all could barely live without. 🧡 View all posts by taylortalksbooks

4 thoughts on “Can’t-Wait Wednesday: 99 Percent Mine, by Sally Thorne”

you can catch me reading, listening to '80s music, or watching classic films. i also love puppers, vines, plants, and traveling (the order of those change from time to time) ♡

happy tuesday! 🤗 it’s my third day home for winter break and being back with my bookshelves is the best (but it also makes me realize just how many books i do have after not seeing them for months lol) 😂 i hope you guys are having a lovely week so far! i’ve been snowed in so, in other words, it’s been absolutely perfect. xoxo 💖
hi friends !! long time, no talk 😩 i swear i’m still breathin lol college has just been extremely time-consuming and a lot to get used to. however, it’s been an absolute dream and i’m loving every minute of it! i hope to return to the book community soon (especially because i go on winter break in the next two weeks) so i cannot wait to catch up on what’s been happening 🤗 on another note, i hope you guys have been thriving and the books you’ve read have been great as well! 💖
is anyone else suuuuper obsessed with book sleeves or is it just me?? 📖 . i recently got this one in the mail from @babymybook and i’m freaking OBSESSED. it’s got this gorgeous wave pattern (w/ some sparkly gold detailing) AND it has a little pocket! perfect for keeping my quote book/journal with me at all times! 🤗💞 . i paired the sleeve with some ocean-themed books i’m excited to read. my gorl alex (@thebooksbuzz) gave me her copy of TO KILL A KINGDOM and she loved it so i’m very hyped to get into it! i’m also suuuper excited to read SEAFIRE since it sounds so wild and badass 😩👏🏻🌊
THE DARKEST LEGACY, by alexandra bracken ⚡️ . i got this one at bookexpo and i’m SO freaking hyped to get into it !! i looooved the darkest minds trilogy and i feel like this book is totally what i need rn (especially because TDM movie is coming out super soon!) 😩🖤🎞
GEEKERELLA, by ashley poston 💜✨ . i (finally!) read this book last month and reaaaally enjoyed it! as a fangirl i found it so relatable and the characters overall were EVERYTHING. i’ve heard that there is a companion book being written and i’m waaay too hyped omggg i already know i’m going to love it 😩👏🏻
here to interrupt your regularly scheduled bookish posts to say I GRADUATEDDDD. ahhhh goodbye high school, you were cool but it’s definitely time to part ways lol 🤪🤪🎓🖤